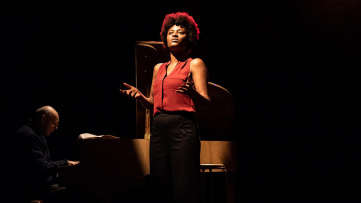 This modern and poetical adaptation of Ibsen’s classic dives us in an apocalyptical and crazy  fairground, following the anti-hero Peer Gynt in his epic search of himself. Always inventing fantasized lives and multiple identities, he questions us  on our world and the weaknesses of our societies.

Directed and adapted by David Bobée 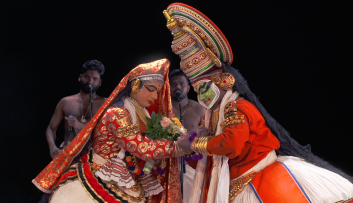 French dancer and choreographer Annette Leday and Australian playwright David McRuvielliam transposed Shakespeare's tragedy King Lear into Kathakali, an Indian dance and theater tradition. The central themes of kinship, love, renunciation to the world and war are magnified by the colourfull storytelling, the make-up and the huge headdresses of the dancers who move the stage through the harmony of their gestures and the intensity of their emotions.

SAMO, A TRIBUTE TO BASQUIAT 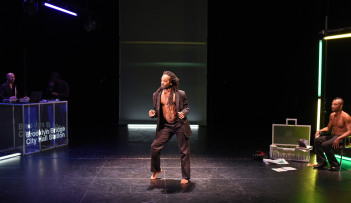 The Ivorian author Koffi Kwahulé traces the genesis of the American black painter Basquiat, father of graffiti and leading figure of the New York underground movement.  The author's text, performed by three actors, three "versions" of the same Basquiat, is crossed by dance, the live music of the saxophone and is punctuated by visual inserts, that prove the frenzy and urgency of creation that animated this meteor whose notoriety had not closed the intimate wounds. 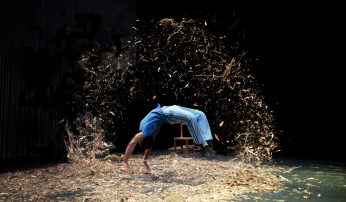 In this creation of the Cirquons Flex company (Reunion’s Island), directed by Christophe Rules, musician, performer and ethnologist, four acrobats from Brittany, Madagascar, Reunion’s Island, and South Africa question climate change and more broadly the crises in our globalized society that is losing its roots. In Creole from Reunion’s Island, «La pli i donn» means "it rains". This circus / theater / musical / dance show is an ode to relationships between people and nature. The rain is hopeful because it gives life, even if the road is long.

THE WORDS OF THE END OF THE ISLAND 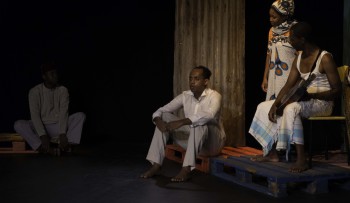 In this play, interpreted by the company Ariart from Mayotte, a poet returns to the lands of his childhood. He tries to find his marks, but everything sends him back to his strangeness, as if he had changed, as if he was not anymore from there. The figure of the mother helps him picking up the pieces of a memory in fragments.This play raises the questions of identity, memory and love at a moment when living together is questionned in Mayotte. 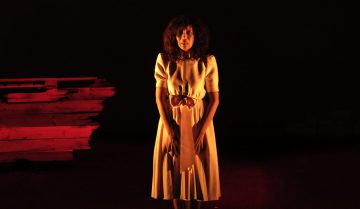 This theater play unveils the destiny of Solitude, a woman who embodies the symbol of the struggle against slavery in Guadeloupe. From the novel "Solitude" written by André Schwarz-Bart, this performance is a diptych highlighting her and her mother who fought against Napoleon when he reestablished slavery in French colonies in 1802 after 8 years of freedom. Today, many feminists ask for Solitude's burial at Panthéon in Paris so that she could officially be recognised as a hero. 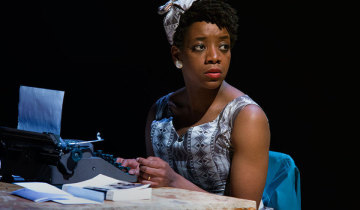 This theater play depicts Maryse Condé's life: inspirated by the poets of negritude, she decided to move  from Guadeloupe to Africa. This show uses video footages of African countries gaining their independance and music to better highlight her tough quest of freedom. 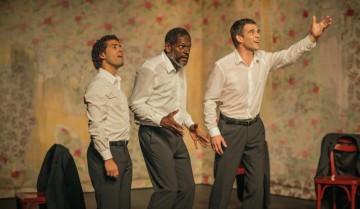 Three actors from three different countries translate Albert Cohen's novel Oh Humans, My Brothersinto a theater play. The writer tells one of his childhood memory, the one of his encounter with hate, when a merchant called him a "yid" in the middle of a crowded street. Though three narrator's voices, the story becomes universal. 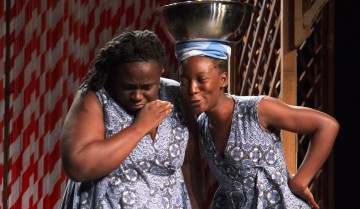 In a village in Togo, a young woman is sentenced to death because she falls in love with a man " from the mainland". Her sister and lover help her to escape the sentence by deploying different stategies. Gustave Akakppo makes a touching, tragic but funny play out of the subordination of women's bodies to men. 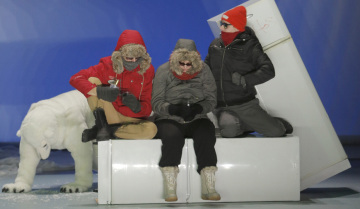 A journalist is looking for information in order to write an article about the Climate Change Conference in Paris. Through what becomes a real quest, David Lescot depicts our relationship to climate change by creating a raging atmosphere with actors,
dancers and circus artists. 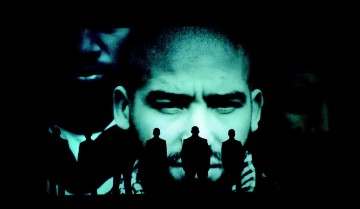 A young man has surprising visions: the past and the present mix and the border between his dreams and the reality is vanishing. Illumination is a musical in which 9 young people from a poor district invite us to pass on the other side of the mirror. We follow their story in a whirlwind of singings, dances, smart, moving and funny scenes. A three generations family saga in which the anonymous heroes shine as stars at night. They vibrate, they live, they laugh, they cry. If you knew what is in their head, you would look at them differently.
Stage director: Ahmed Madani.
Théâtre des Halles - Avignon 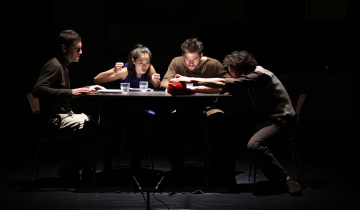 Thomas Guerry, choreographer and director and Camille Rocailleux, composer and director sign a brilliant hilarius non spoken danced play. A man is busy with his daily actions in the privacy of his cramped inside. Small unexpected events gradually gripper his mechanical repetitive existence. They take a disproportionate importance precipitating situations becoming more and more excentric. 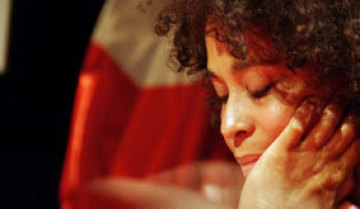 Through the story of four Afro-European friends living in a hype way in Paris, you will discover their everyday-life problems and have a better understanding of the deeper thoughts and identity issues of black women in Europe. Léonora Miano, awarded by the prestigious "Prix Goncourt des lycéens” in 2006 signs here a beautiful play mixing humor, drama and dance, even involving food flavors. 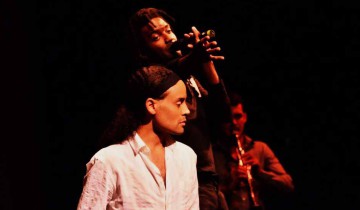 This theatrical adaptation of the texts “Afriques Diaspora Négritude” by Marc Alexandre Oho Bambe (Captain Alexandre) flirts between slam, poetry, theater and music. It is a manifesto against the oversight of the black condition, which invites to a reflection on the black legacy. It is also a tribute to Aimé Césaire whose incandescent word, symbolizes the breath of the standing man.
Théâtre de la Chapelle du Verbe Incarné - Avignon 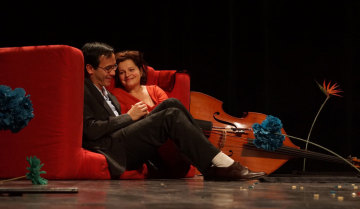 In a family house, a party is about to be thrown as a stranger rings the door’s bell and says he wants to set fire to the house. As the daughter invites him to come in, it’s the beginning of a play between tragedy and comedy, full of humor, violence and poetry.

THE DAMNED OF THE EARTH 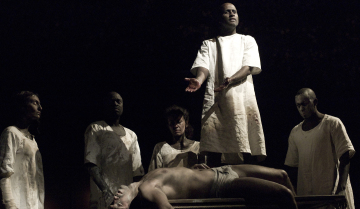 Through this musical and poetic performance, you have a chance to discover a small part of the work of the famous but too often forgotten activist Frantz Fanon. Even though he was French, he took part in the Algerian liberation movement (FLN) during the Algerian war against France taking position for the independence of the country at a very early stage and died as an Algerian. His books exploring especially the psychiatric consequences of colonization are still very accurate.
Le Tarmac - Paris 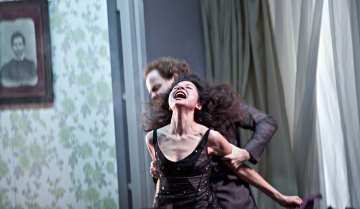 Emma is like Flaubert’s Emma Bovary. Behind her need for
money and the debt in which she is diving, her desire to be part of the world is hiding. The man does not see the troubles she is going through: his love for her makes him completely blind. You will be moved by this very accurate play full of passion.
Théâtre Dijon Bourgogne 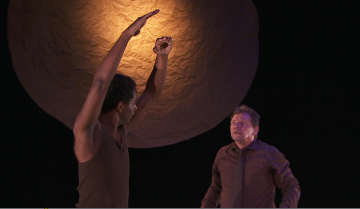 This play is an adaptation of The Little Prince, by Antoine de
Saint-Exupéry, the most translated book in the French language (more than 250 languages) and one of the best-selling books ever published. In this staging by Maroccan Stella Serfaty, the blond litte boy is a Black man because for her, this tale is a social criticism of our civilization, in which people are sheeps. This theater play for adults, with video, music and a sand artist plunges us into a world, where the time to draw a picture is as important as the drawing itself. 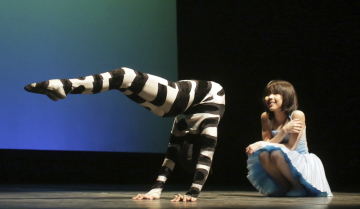 "Chinese" Transposition of the famous novel by Lewis Carroll, this performance mixing circus and dance will take you into Alice’s journey in Wonderland. The Chinese performers offer fantastic perspectives on this story, fostering your own imagination.

Gruber Ballet Opera and Academy of Circus Arts in Tianjin. 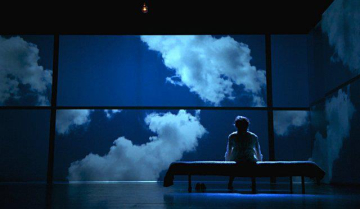 After Pinocchio and Little Red Riding Hood, French renowned
director Joël Pommerat appropriates, transforms and sublimes the famous tale of Cinderella. Here she breaks all stereotypes about fairies, princesses or witches. Before dying, her mother tries to talk to her, but she does not hear her words properly. The daughter invents a "promise" that her mother would have
asked her to follow. This misunderstanding leads the young girl to great suffering. Her meeting with a prince, an orphan too, will make it possible to understand her mistake. 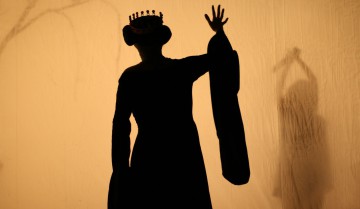 The director, Nicolas Liautard revisits the tale of Snow White
in a unique way through a dreamlike and visual spectacle: it is not a theater play because it is not spoken; it is not an opera but there is music. It is a contemporary adaptation combining four actors, puppets and live animals. This performance of great beauty got nominated at Molières 2010 in the category young audience. 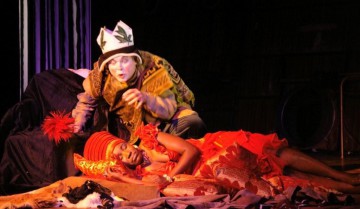 In an enchanted clearing, the thwarted loves of the youth and
those murderous of the kings and queens are the masters of the action. Misunderstandings give rhythm to this imaginative and burlesque show where dance and theatre mingle with music and singing. Richard Demarcy directs with brio the Naïf Théâtre’s actors on stage, originally from France, Senegal, Taiwan, Cameroon, Portugal, Angola and Quebec, to better suggest the story of interlaced worlds. 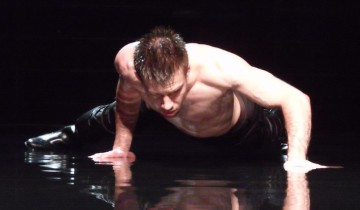 David Bobée stages a Shakespeare’s classic again introducing dance, theatre, circus, music and video in Hamlet. He approaches this mythical play by plunging us into a very cinematic universe: a bright and cold morgue, covered with black tiles, which will be waterlogged. This Hamlet is firmly contemporary, physical and intense. Shot at the Maison des Arts in Créteil.